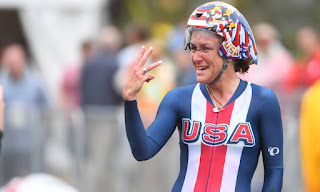 The Olympics celebrates youth, and always manages to point out that an athlete is "old" if she's in her twenties or thirties. So it's probably tough for an elite athlete to have the narrative be about her age (Kristin turned 43 the day after her big win) instead of her epic ability. Somehow, Kristin Armstrong seems to own it, though, and I find her to be a total bad-ass because of it. She came out of retirement, recovered from hip surgeries, works a real day job, and is a mother on top of that. And oh yeah, she's been on top of the Olympic podium THREE CONSECUTIVE TIMES.

Maybe it's just me, but I don't see my thirties and forties as a scary time to slow down and accept aging. Even though some things aren't what they were like when I was in high school or college, I actually feel most things getting better with time, even after having one baby and another one being on the way. There's still a lot that I want to accomplish in my sport and I know I have the time to get there, if I can work for it.

She's just so inspiring for that reason. I keep having flashes of her image, collapsed near the finish line asking if she won, then in tears of joy and exhaustion as she held her son moments after the race.

I haven't been able to golf much lately (this week's reasoning being a lack of a baby sitter), so it means I got to go to my favorite indoor cycling class at the gym. With Armstrong as my inspiration, I think I got the best sweat I've gotten in a while. I'm desperately seeking a sitter so that I can play in the league championship next month though and hope to be back at it before this baby bump gets too much in the way.