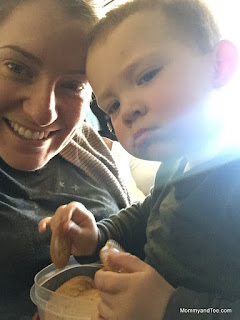 Last week the kiddo and I piggy backed on a business trip my husband took, grabbing a ticket on the the first leg of his Southwest flight that happened to connect through my parent's city. The plan was that he would continue on to his destination, and then at the end of the week we'd reconnect again when he made his layover and we would all fly back home together. I was very excited to go home for a week and see family, especially on a week when I would be parenting on my own the entire time.

We felt very confident in this plan. We flew one month prior as a family to Colorado for vacation, and I had done a LOT of prep work to make that flight as painless as possible. We found that an early flight suited our style best, since we didn't want to bank on him needing to nap on a plane. In the wee hours of the morning, we got ourselves up and dressed, loaded the car, and then scooped him up in his jammies to snap him into his car seat. He is the type of kid who can adapt to an earlier wake up call easier than a belated nap, and this worked wonders for us. Pooped from the excitement of travel, he was passed out in my arms the minute we took off. Later in the flight, the seat we purchased for him would prove its worth when he woke up and needed space to wiggle and play.

So this time we thought we could replicate the same magic, even though it was a different airport and different carrier. Southwest doesn't assign seats, so we gambled that we would be able to reserve ourselves an entire row and decided not to purchase the extra seat since it was so last minute that the cost was just ridiculous. And if we did have to hold him, at least there would be two of us to help each other out in a pinch.

We woke up that morning at the first sound of the alarm, and whisked the wee one into the car for the 40 minute drive to the airport. We parked, took the bus to the terminal, and were just getting into a good travel groove when we got a rude awakening.

Southwest demands proof of a lap baby's age in order to issue a ticket. This has never happened to us any of the other times we've flown (which was several times before he even turned one) on any other carrier (again this was our first Southwest flight with him). They prefer a birth certificate but will take an immunization record.

Neither of which we had.

And the ticket agents and their supervisors wouldn't budge. So I was moved to a later flight to allow time to get the required documents. Unfortunately, however, my husband's flight had to be coordinated through his work's travel agent. This meant that we would be split up for the outbound flight.

Until this point, I had never flown with my child on my own, and I was about to do so with a not-yet-two-year-old who would have to be in my lap the entire time.

Since we hit rush hour heading home and back, the length of the drive tripled. But we finally made it back to the airport with a copy of his birth certificate. Keep in mind that at this point we had been up since 4:30 a.m. and would have been a third of the way into our flight. The baby slept in the car, which wasn't the plan either, but who could blame him. We, on the other hand, found the nearest drive through for coffee, which we don't even drink. I knew immediately I would have to rule out him napping on the flight and just tried to stay calm so that I would be my best toddler-wrangling self on a packed flight.

My husband's flight was later than ours so he saw us off. We paid for the upgrade to early boarding which got us on the plane first after anyone who needed special assistance. My plan was to take an aisle seat up front on the same row as a young boy traveling on his own who had a window seat, because I figured that would be a sure deterrent to anyone in their right mind, and maybe the kids would entertain each other.

I let the kiddo play around in the middle seat as the general boarding continued, and it seemed as if my plan would work. Then, at the very last minute, he climbed into my lap for a cuddle right as the very last person boarded. She wasted no time and settled in the center seat. There was exactly one more seat available but it was much further back between two large men, so I guess you pick your poison in that case.

From coaching golf, I learned that I have the power to set the tone I want -- or at least the power to control the tone I set for myself. I can't always control others around me, but by staying calm and in the present, I can hope for at least positive interactions with others.

Of course, I would always want my team to play their best. That's obvious; we wanted low scores and knew we were capable of them. But the best golfers know that the game is full of uncontrollables. Maybe you'll hit a beautiful drive, but an outside agency will move it away from the fairway. Maybe it will be completely silent during your backswing but on your follow through your competitor sneezes. Maybe there's a freakish snap in the weather mid-round.  Maybe, as happened to my team in the last tournament I coached, your team is one stroke off the lead in the final round and playing amazingly, but a big storm comes through forcing the event to be called, and you lose the biggest tournament of the year by one stroke.

Uncontrollables are all around, and what I learned from coaching golf is that I can either decide to be a victim or tell myself that I'm in power. I can tell myself how fortunate I am that this is the problem I am facing when there are so many others in the world who have it so much worse than me. The decision to be capable is almost more powerful than whether or not you actually are.

This is how I've tried to parent -- calm, present, grateful, and positive -- and sitting down on that plane I made myself make the choice to be that person with not only my child, but with every other traveler around me. It was a choice I would have to remind myself to make over and over again on the flight. I reminded myself to be grateful that this was a travel problem

And we got through it. He was about as good as one could hope a toddler would be. Cranky at times but not terrible. We were lucky that the two things I feared most did not happen: a huge toddler tantrum meltdown, and a huge diaper blow out. And honestly the rest of the flight was a blur, skipping around activity to activity and making small chat with my seat mates.

As the plane touched down a woman seated behind me told me I was "the best mom." She said that I "was totally in his groove" and "perfect for him." I'm not saying this to brag, rather it just felt so nice to hear those things after such a long travel day because it really did not feel like I was any of those things.

And before I get any more unintentionally preachy, I'll end it here. Thanks for reading about my experience sharing 17 inches of an airline seat for three hours with my toddler. I'd love to hear back from anyone with the similar experience of applying important life skills learned from one discipline to something seeimingly unrelated!
Posted by Unknown at 7:40:00 PM