My first Nextgen tournament and I did not play that great.

Come one, come all, gather 'round as I share the horrible tale of the golfer who won two longest drive competitions and one closest to the pin competitions in a single tournament but still did not break 100.

Yeah. It was that kind of day. My heart always tries to keep things positive and I truly believe in looking at the bright side (which I will get to later in this post), but this was NOT a good round. I won't rehash hole-by-hole since it was 18 this time and not 9, but it bears some reflection. 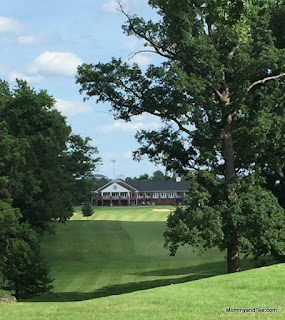 Last weekend I was lucky enough to get away from home to play in a Nextgen City Tour tournament. Nextgen hosts events for 18-34 year old golfers of all skill levels. The format is best ball or scramble, and it's promoted as a way to play more, network, and have a good time. I found my team through the GolfMatch app. This is a mobile app that allows you to find people in your area to play with. I've been messaging the ladies I played with for a while and it worked out well that we all wanted to play this event.

So going into this weekend, I was excitedly nervous about two things: playing with people my age, and playing in a more robust environment than my weekly nine-hole league rounds. I was anxious about looking and playing like a good golfer, and not looking and playing like a pregnant hacker. Everything made me uncomfortable. I wondered if my clothes looked too baggy since I had to accommodate the bump. I wondered if it was dorky that I played with the Calloway Chromes that look like soccer balls (even though they make me happy). I wondered if the fact that I am a stay at home mom would make me a weirdo. So a lot was on my mind in addition to the pure excitement and joy to play golf.

This anxiety followed me the entire drive to the University of Maryland's golf course (which is seriously baller that they have one right on campus!), throughout my warm up (and because I was so early for fear they would move me up or something I warmed up for more than an hour which probably made me tired), and for the first nine holes on the course.

I was a huge ball of nerves. I couldn't tell if it was obvious that I was pregnant, but also when offered a beer by my playing partners couldn't decide if I wanted to tell them why I was declining. I ended up not telling them, and then the anxiety of whether that was awkward or not hung on my head for a while.

Nextgen fortunately has a triple-par score limit to keep pace of play, meaning you can't get more than a triple par on any hole. This is great for both pace of play and because it makes tournament golf accessible to newcomers.  I took it for the first four holes -- on the first, I managed to putt in for an 8, but since it's a par 4 we gave me a 7. Then the next three I didn't even finish the hole, I just picked up, frustrated and embarrassed.

But I finally got my head right for the fifth hole, after a text exchange from my husband finally settled me down: 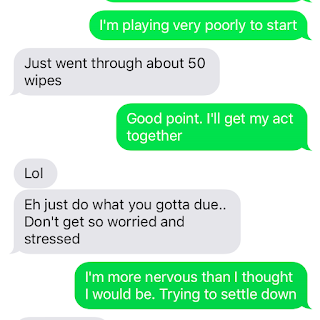 I just needed to be reminded my mantra: there are no diapers on the golf course! Suddenly I felt stupid for being so worried and decided I would make the best of the day despite the damage done. The score would be what it would be.

And just like that, I got a par on the next hole. That's not to say that things suddenly clicked and I was on fire, but there's something to be said about the attitude of gratitude. I might be playing like shit, but at least I didn't have to handle any literal shit while I was there. The rest of the day was a bit up and down, with only one more par and a lot of bogeys (and then some).

But, I did get a closest to the pin and not one but two longest drives. That felt pretty awesome.

"Does anyone want to keep their scorecard?" the organizer asked at the end of the round after scoring. "No," I said under my breath, "burn it."

I really enjoyed meeting the women I played with, and so I highly suggest the GolfMatch app to anyone looking to find new people to play with. Hopefully I'll get more rounds with them before the summer ends!

I can't say I really loved the Nextgen tournament environment, but I'm trying to keep myself from being too biased. When you play poorly, it's easy to think it's other people's fault.  I dig what they're trying to do for young golfers and grow the game, but I can't decide if I'll ever play in one of their events again since I'm kind of embarrassed about how I played. Then there was the fact that my best ball partner did not get paired with me in the scoring system, so I came in dead last as an individual... which kinda felt like salt in a silly wound. But a few days later our team got a very nice email from the organizer thanking us for playing, apologizing and explaining for the scoring error, and inviting us to play again. That was very cool of him to do!

Now on to the good things: in a strange way I'm actually kind of grateful for having these competitive opportunities where I feel crazy uncomfortable and even fail a little bit. As a coach you gain great new perspective into the mental side of the game and I felt like I was getting really good at helping my players mentally through their nerves. But these types of experiences show me just how valuable it is to keep my competitive experiences fresh so that I can pass along this knowledge with a fair amount of credibility. My goal is to someday get back to coaching and I am grateful in a way for having the opportunity to break a little bit, so that I can grow and be stronger.
Posted by Unknown at 10:40:00 AM